Hi All - I have a question about longer base periods for returning to fitness. I’m a former athlete, now in my mid 30s looking to get back into shape. I realized in February, 2021 that I qualified as sedentary and that needed to change. I’ve been running or riding 3-5 days a week since that time (weekly TSS around 300). Over the last 1-2 months I’ve been focusing on more on sweet spot intervals (usually totaling 30-60 minutes) and 1-3 hour zone 2 rides, with the goal of building the best aerobic engine I can. Although my primary goal is simply improved health, I would love to start doing hill climb or time trial events next year.

How would you approach a 6-12 month long base period? No wrong answers, just interested in a variety of ideas - how would you go about this?

If you are a former athlete you won’t have any problem in using this amazing Alex’s spreadsheet for year round training FFT periodization planner [fft.tips/tpp3] - Google Tabellen

For that long a period, I would go Polarized. A lot of S1 (Z1/Z2), about 90% of total time. And then about 10% high intensity, where that 10 % evolves slowly from Tempo/SS/Treshold over Vo2max to Anaerobic.
Don’t be affraid of doing Tempo/SS/Treshold in a Polarized model. What counts, is that those sessions are really hard. 1,5 hour straight SS is hard, or not?

@Gato_Felix looks fantastic. If you were aiming for something outside of the same year (e.g. start base phase now, race next August) would you simply extend the late base phase or perform a series of base/early build cycles? Again, just interested in how you might approach it

Oh definitely agree that that amount of sweet spot would be hard… when it starts to get easier I update my FTP. I’ve also been trying to read more on aerobic decoupling and HRV to gauge effect.

Just to be clear I’m only an enthusiast far far away of being a coach.
It depends what you want to peak for if any and how far you be. Less than 6/7 months wouldn’t be realistic. 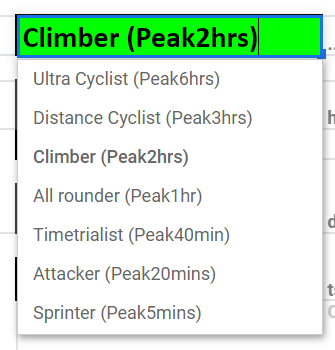 But if you have at least 6/7 months just follow the spreadsheet.

@Gato_Felix thanks for the resources! I know this is more hive mind than coaching, but I’m interested to see how different people would approach the same problem. Love your suggestions

I wouldn’t be able to train for that long without some racing. After an extended time off the bike, I started in July 2020 did 4 weeks of riding, then in to 9 weeks of polarised. Raced a few CX events. Back to polarised for the November - March with the intention of racing from April. My long ride during this time was in Z1, super easy but 4 -7 hours - I had the time why not.

One thing I noticed about doing polarised training in this way was that it did wonders for my “fitness”, but it was shallow - in that repeatability and especially repeatability at the end of a long ride. Switching to a more traditional rounded training approach has allowed me to build a depth to that fitness. I found polarised training to be quite mentally / neuromuscular fatiguing, where as traditional training is more physical fatiguing so very nice to switch it up.

If you’re going to be doing an extended period of training without competing, I’d keep an eye on development and once it stagnates, switch up the training to keep some novelty. You could also plan 1 or 2 peaks in that period and go through a full base build peak cycle. This would allow you to get an idea on how it works for you trying to peak for an event.