First off, I love the application. I use it for the cycling side of my training and it’s been a game changer. It has far more features and levels of analysis than anything else I’ve seen on the market.

I would like to use it for other sports too though, and I found that when uploading rowing activities (from a Concept2 ergometer via Strava) it doesn’t apply the same kind of analysis and generate a power curve for rowing as it does for cycling. I’m talking things like the power curve showing peak power in last 42 days and over the season for various timed efforts. Having it converted to time/500m similar to the concept2 screen would be a bonus.

Is there an easy way to switch sports and get the same level analysis as I do for cycling, but for those sports as well? I’d like to see a curve for something like rowing which is also power-based.

I don’t know if I’ve explained that well but let me know if I can clear up what I’m asking for. If there’s a cost associated with doing the work I don’t mind donating to get it done either! I love this website and thanks for your hard work!

Tx. I have running and other sorts of power on the todo list. I hope to be able to get to that in the next couple of weeks. Been on the list for a long time. There is quite a bit to do e.g. I need to have “FTP” for each sport and so on,

I have the same ergometer, if you need data samples from it please PM me.

Thank you so much for such a “on point” software.
Making it available to everyone is unbelievable of you.
I’m using this thread to make my first comment, because I wanted to complement what Andrew_W said about the Concept 2 erg.
Do you think it is feasible for you, in a near future, to make intervals.icu import directly from the concept 2 logbook? From my experience none of the middle-man apps (Strava, TP, Garmin…) import the whole data from the log, “power” being the most important of them missing.

It is possible (they have an API) but I am really stretched with a bunch of dev tasks so not soon unfortunately. It might be worthwhile to try persuade them to implement Dropbox upload. Then it would be easy.

Hi david. Thank you for your reply.
I’ll make that request with them.
By “Dropbox upload” you mean that everytime I’ll complete an exercise on my rower, the fit/tcx (which would be preferable?) gets uploaded to a dropbox folder, right?

Yes thats correct. The fit file is definitely the one to use.

I’ve already emailed them.
I decided to start to use dropbox and it’s working great.
I download all my fit files to a specific folder and intervals.icu just import them. Sweet!
I have one small request that would make importing past exercises so much easier: when I import a fit file from Concept2 logbook, intervals.icu imports it as a “Workout” instead of “Rowing”.
Would it be simple to change this for all fit files imported from Concept2?
Thanks once again.

Cool. I made an update and those files will now be correctly identified as “Rowing”. I noticed that you have rowing set to 0% fitness and fatigue in /settings: 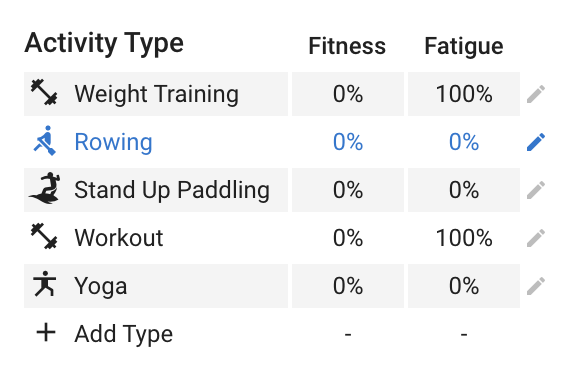 That will cause the training load from the HR data to be 0.

You can use AK Concept’s datafield / GIQ on Garmin watches, and get power, distance, cadence, etc. over. However, I see intervals.icu recognize them as “strength” workouts rather than rowing. We have done it this way for a few reasons:

So I can highly recommend using Garmin IQ datafield from e.g. AK Concept - and not their app. It is not the most polished datafield, and someone can probably easy make a more native looking datafield, but it does the job.

I see intervals.icu recognize them as “strength” workouts rather than rowing

If you send me a link to an Intervals.icu activity for one of those I will have a look at the file. I might be able to recognise it as rowing.

Oh thanks for noticing! How should I set those parameters?

Just rowed and uploaded through Dropbox, sets are now imported as rowing. Perfect!

Cool. You just need to click the line for rowing and then click “Defaults”. Your rowing is cardio so no need to mess with how it is applied to fitness and fatigue.

Glad this tread exists, I have my Concept2 arriving in a few days, was curious if there was a way to import fit files with power. Seems like that’s the case and Dropbox is viable way to get them in I.i. SuperCool!

I am working on generalising the power support in Intervals.icu to running, rowing etc at the moment. Right now you can see the power on the activity but not power curves and so on.

Well, I see power (and cadence) data in intervals.icu from a rowing session after imprinting it via Strava. that’s awesome per se. Thank you David!

Power curves and so on for rowing (and running etc.) coming in the next couple of days. Almost done!

Slightly related: Whatever you end up doing with rowing, can also be done for Nordic Ski - this will enable the same stuff for workouts done on a Concept2 SkiErg. Thanks!

You just need to add a sport for Nordic Ski in /settings, enter an FTP and configure power zones and it will work.

When I upload a rowing session it says in the details “Copy your FTP and Power zones for Rowing in settings to enable power analysis”.

Can you guide me on how to enable this?