With the data imported to Intervals, I selected ‘Use Laps’, and the laps show up, but the data looks very different. Indeed, it looks like the intervals are shifted in such a way that there are a lot of zeros in the data. 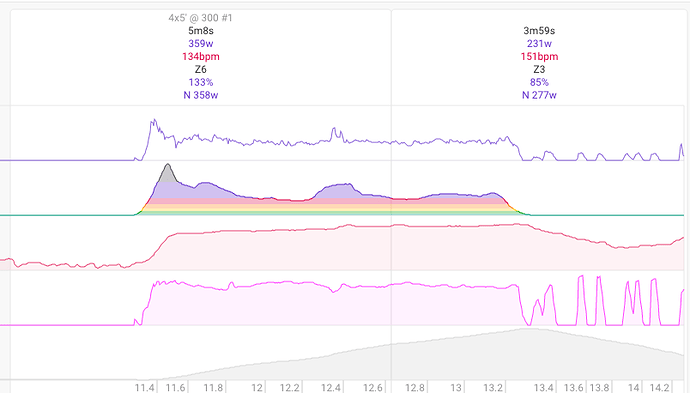 If we look at the data in the Interval Data tab, we see this:

Which is pretty suspect, because lap 3 was a rest lap. According to Strava, my average power for that lap was 46w, which checks out because I was mostly rolling downhill and trying to rest.

Strava also says my first lap was 36:26, but in that table, my first lap is only 33:51, which is a pretty significant drift.

Is there a problem with using the lap data specifically? I’ve resynced the data from Strava to be sure, but definitely once I select ‘Use Laps’ it all goes a bit sideways.

Edit: If I manually clip the intervals from the start of the power to the end, the calculated values come out to the same as Strava’s, so it’s just the alignment of the imported lap data that appears to be wrong.

Did your ride start or finish in the Strava privacy zone? David says that Strava exports incorrect data in those cases. I have the same problem with my running workouts — I always fix intervals manually

Oh, yes! That totally makes sense. I was just in the process of creating a dropbox account to sync my wahoo data from now on instead, so I guess this will solve that problem!

Glad I searched the forum before posting. Finding the same problem.
The privacy zone eh? Ok, would have never thought of that.
So using the DropBox upload should fix that?

You can test by manually uploading your workout file. It will replace the matching Strava activity.