I’m not sure, but you’re also calculating average based on total time elapsed instead of moving time? If the former, then yes, it will influence the average. But I do have long days in the saddle, during which I’ll probably have a break or even a lunch (30 - 45 min break). I would like to see the power curve, but if an 8 hour ride, with a 1 hour stop returns useless numbers (beyond the break, I presume?) then there’s no point. Let alone for a ride of 8 hours with 6 ~10 minute breaks

Although these 8 hour rides are probably out of the scope of this site, as you will not typically do a lot of interval training during those rides. Sustained efforts, probably, maybe even a sprint, but calculated intervals, not so much…

I’m in favor of your current method. Training for longer events with minimal to no stops, I don’t have any use for data that includes a cafe break. I may stop for an emergency can of Coca Cola and some carbs on a six hour training ride. But, if I’m doing a simulation workout or targeted efforts I’ll be hustling out of the convenience store stuffing food in my face, not chatting over espresso and croissants…

Not sure how to interpret that. It’s not uncommon for cyclists to have a coffee break during > 6 hour group rides, or even when they are all by themselves. The action is when riding and that’s not any easier in hour 7 than it was in hour 2…

It may not be easier in hour 7 than hour 2, but a coffee or lunch break will certainly impact performance in hour 7 vs. a continuous effort with little or no stopping.

Just to clarify, not at all bagging on coffee/brunch/lunch/beer rides. I’m personally not interested in total power on either side of a long break or average power of a social ride. It doesn’t give me a realistic view of current performance that’s helpful to training towards my goal event. If others want that info, that’s all good too.

Fair enough, although I wasn’t really referring to ‘social, coffee/brunch/beer rides’, but more to the typical hard core team ride, with two dozen city limit sign post sprints in them.

Plus, I will probably ride at higher intensity before and after my break, than I would for the total without a break. At any rate, I do believe it helps you assess your performance

Anyway, if there is an average power to be had, I’d like it to be calculated using moving time

That makes sense. I’ll do “tired” intervals and sometimes take a quick snack break before I start them 2-3000kj into a long ride.

I’m not sure, but you’re also calculating average based on total time elapsed instead of moving time?

For the power curve its work done (J) / elapsed_time. Using only moving time inflates the numbers quite a bit with traffic light stops and so on. If you don’t have any stops they will be the same anyway. The data is calculated against an interpolated 1 second per point power stream with drop outs and other anomalies fixed.

For intervals the default is average power excluding zeros. If you are doing a “work” interval then a zero is your power meter acting up. If its recovery then its nice to know that you were riding in Z2 even though the average power dropped to Z1 due to traffic stops etc… 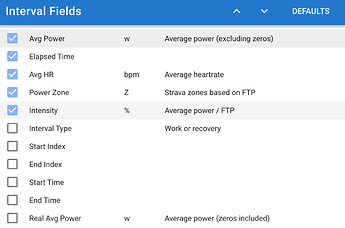 Not necessarily, if I’m riding outdoors. I may have to corner and stop pedaling. I’m still moving though, so this instance is included in the average.

I just figured that if I physically stop and (thus) do not produce any power, this could or should be taken out of the equation.

This is a very interesting discussion because it also concerns how TSS is computed. Every time you stop or coast your TSS will still rise. Which is, broadly speaking, a result of time having a bigger impact on the TSS calculation than the lowered IF. In certain apps, like GoldenCheetah, you’ll get a different TSS value depending on if you use Garmins auto-pause feature or not. For the same ride.

The question is: how many consequential zeros (W) should you count towards the TSS?

One extreme would be to not count zeros at all. But as we all know your body is still working after you stopped pedaling. Especially after hard intervals. This would also be problematic with the way NP and thus IF is computed since it needs a rolling average window of 30 seconds.

For the other extreme you would include all zeros. However, then a continuous base ride of 3 hours would result in a lower TSS than the same base ride with a 1-hour coffee break in between. Although you expended the same Joule overall in both rides.

So, how much of a break to include in the calculation is an ongoing discussion. Even Coggan, Friel, Liversedge (GoldenCheetah), … can’t agree on a particular number. The term “burrito break” was coined in this context. Thus, if there was enough break to get a burrito you should restart the TSS computation.

Long story short: I think the 10 minutes used by David is a sensible decision.

Hi @david Curious as to why the data from my workout last night don’t show up on my power charts, but they do appear in the power curve for the ride.

Those stats are re-calculated between 3 and 4am every day (GMT+1). So they table won’t change immediately but your position on it should. For that ride your 60s power is just under your 42d and season numbers so I think its right?

I was more curious as to my 20min. I did 363w and the charts and power page still read 337w. It wasn’t recorded as an interval but shows in the power chart for the ride itself, just not the main power page or charts.

Fixed! It was a timezone related issue. Sometimes the most recent activity would be left out of the power curves and rankings. Tx for the report.

Thx David. Was honestly hoping it was an issue and not a case of having to go in myself and highlight intervals. I avoid my laptop like the plague if I’m not working

Thats strange. Its working for me. Do you mind reloading the app to see if it goes away. Tx.

Just reloaded, still the same. But only for eFTP, all other durations are fine.

I have managed to reproduce this and will fix tonight. You need to select “Male” and “w/kg”. Other age groups seem to work.

Fixed! Tx for the report.